E&C Republicans to Biden: Stop Pandering to Dictators When We Can Produce Energy Here

President Biden continues to turn to foreign dictators and adversaries for energy, rather than encouraging more oil and gas production here at home. Over the weekend, President Biden issued permits to drill oil in Venezuela. Earlier this month, he vowed “no more drilling” in the United States.

Instead of reversing course on his rush-to-green agenda and war on American energy, President Biden is ceding our global leadership by making it easier for foreign dictators to profit off American consumers and use energy as a weapon.

Energy and Commerce Republicans are calling President Biden and his administration out. If they were serious about reducing emissions and helping lower prices for Americans, they would flip the switch and unleash clean, reliable energy production here at home. READ:

Republican Leader Cathy McMorris Rodgers (R-WA): “Instead of getting serious about flipping the switch for more energy production here in the U.S.—which would help lower energy costs and reduce emissions—the Biden administration continues to cede our global energy leadership to corrupt regimes. Easing sanctions on Venezuela—a dictatorship allied with Iran—is just the latest example and harkens back to President Biden’s decision to waive sanctions on the Nord Stream 2 pipeline, which strengthened Putin and invited the attack on Ukraine. Rather than going hat in hand to our adversaries, President Biden needs to abandon his war on American energy and join Republican efforts to unleash the abundant energy resources we have right here at home.”

Energy Subcommittee Republican Leader Fred Upton (R-MI): “Our nation needs to center on North American energy resources, not depend on dictators elsewhere in the world.”

Rep. Kelly Armstrong (R-ND): “They never miss an opportunity to miss an opportunity. When you do everything you can to stop domestic production, it’s a real problem… Why would you reward the bad actors and hinder the good actors?”

Rep. Bill Johnson (R-OH): “I wasn’t surprised to learn the Biden Administration is turning to Venezuela for oil. The President and his team have repeatedly demonstrated they will beg any nation for oil while consistently restricting energy production here at home. Now is the time for choosing. The world needs energy — American energy. This is a historic opportunity for our leaders to come back to reality and realize that if we ruin our economy by pursuing these arbitrary ‘rush to green’ goals to achieve this ‘energy transition’ by shutting down our affordable and reliable energy resources, resource-rich rogue nations like Russia, Iran, and Venezuela will fill the void.”

Communications and Technology Subcommittee Republican Leader Bob Latta (R-OH): “Since President Biden’s first day in office, he has made a concerted effort to crush domestic energy production. This effort now includes lifting sanctions on Venezuela’s authoritarian regime and reopening U.S. markets to import oil from Venezuela. Instead of turning to authoritarian nations to supply our oil and gas, we should be investing in efforts to boost energy sources right here in the U.S.”

More from Energy and Commerce Republicans: 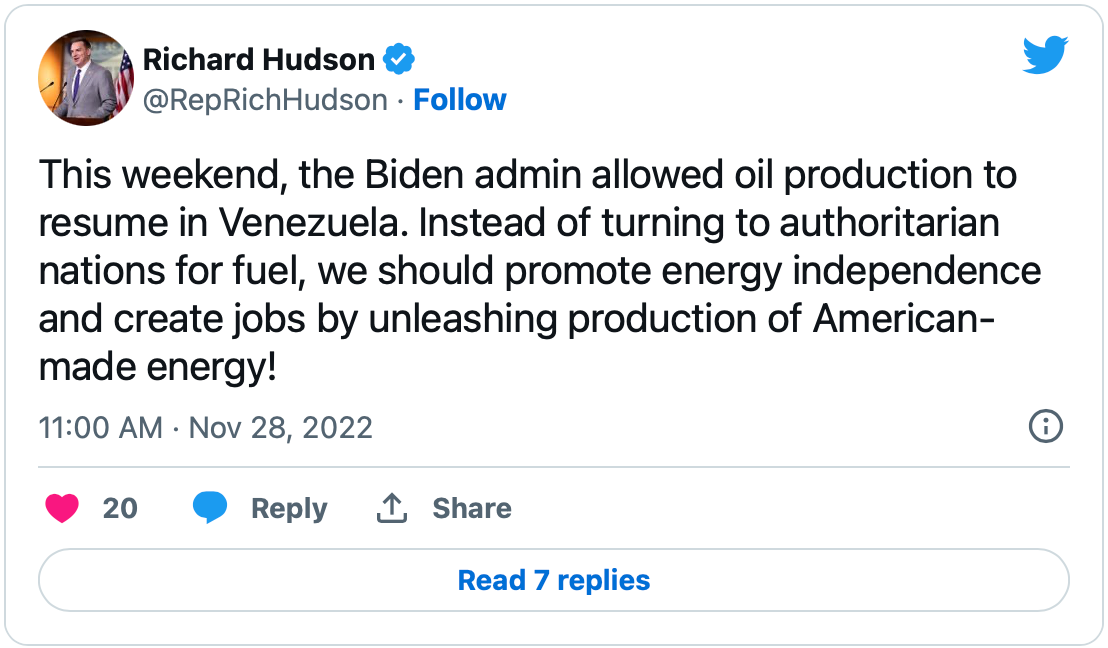 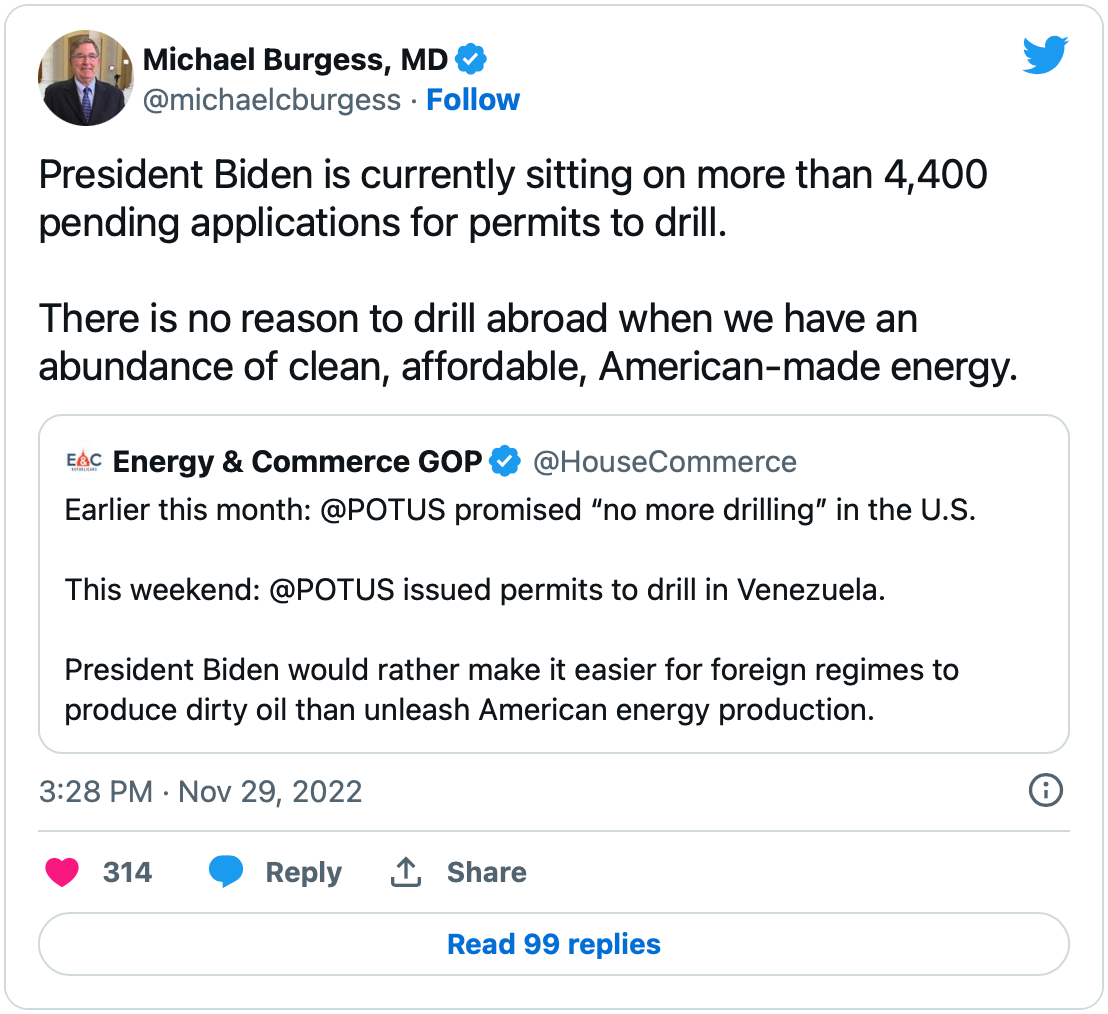 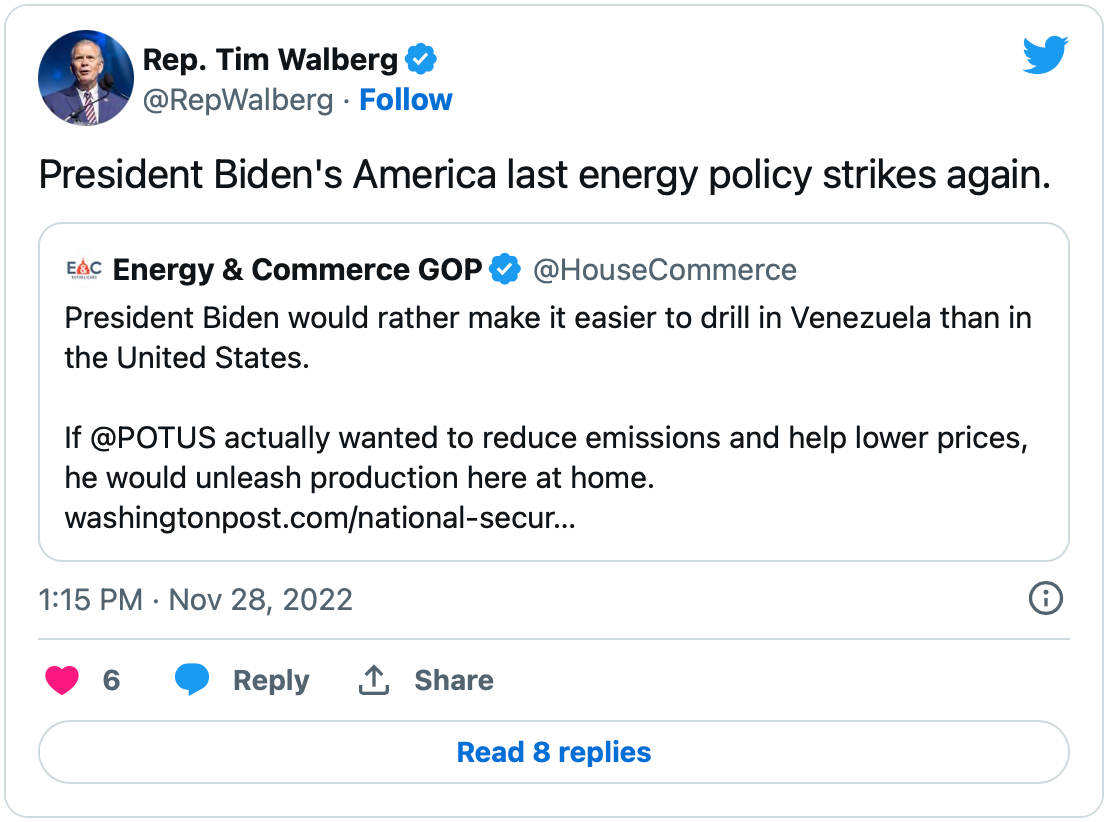 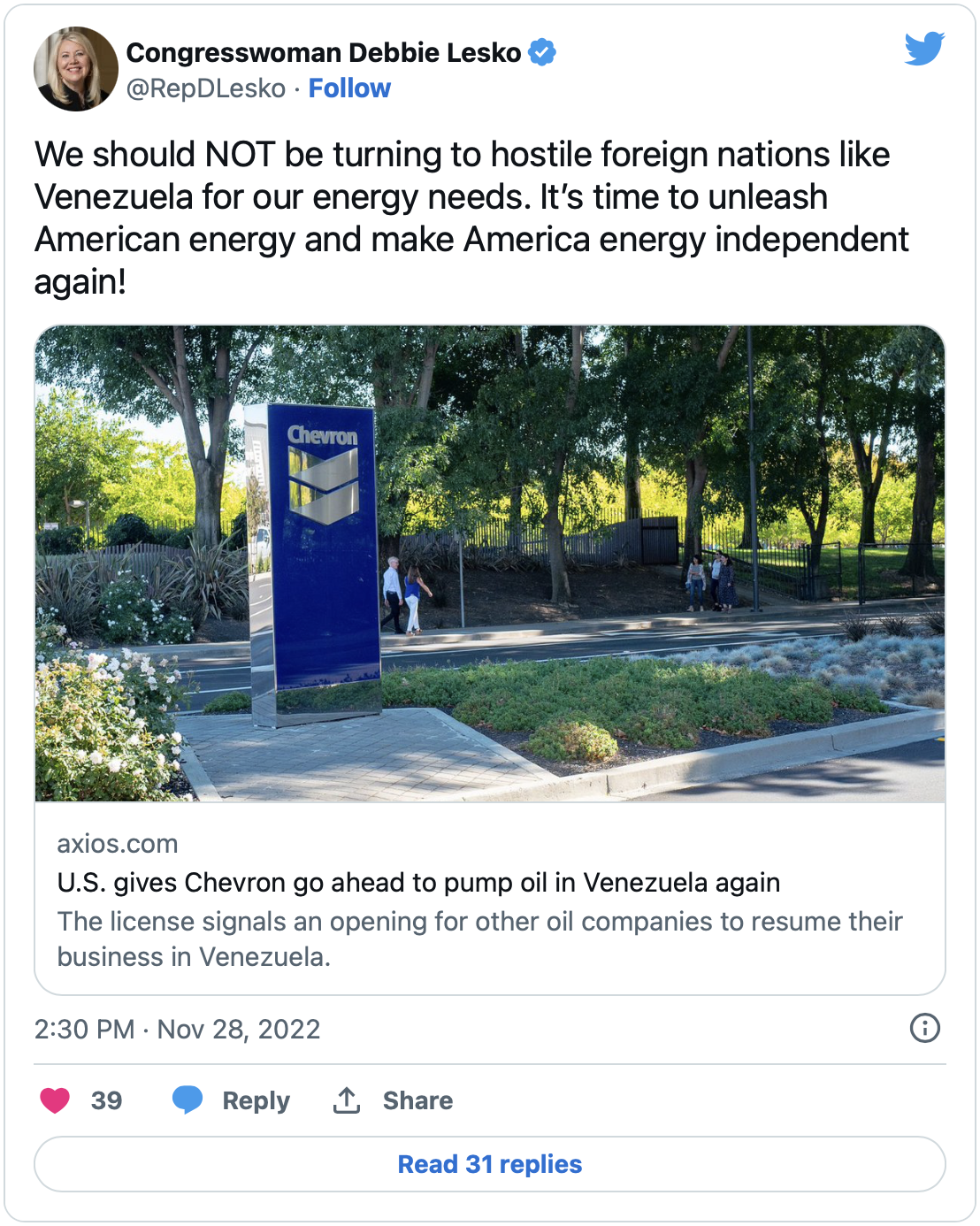 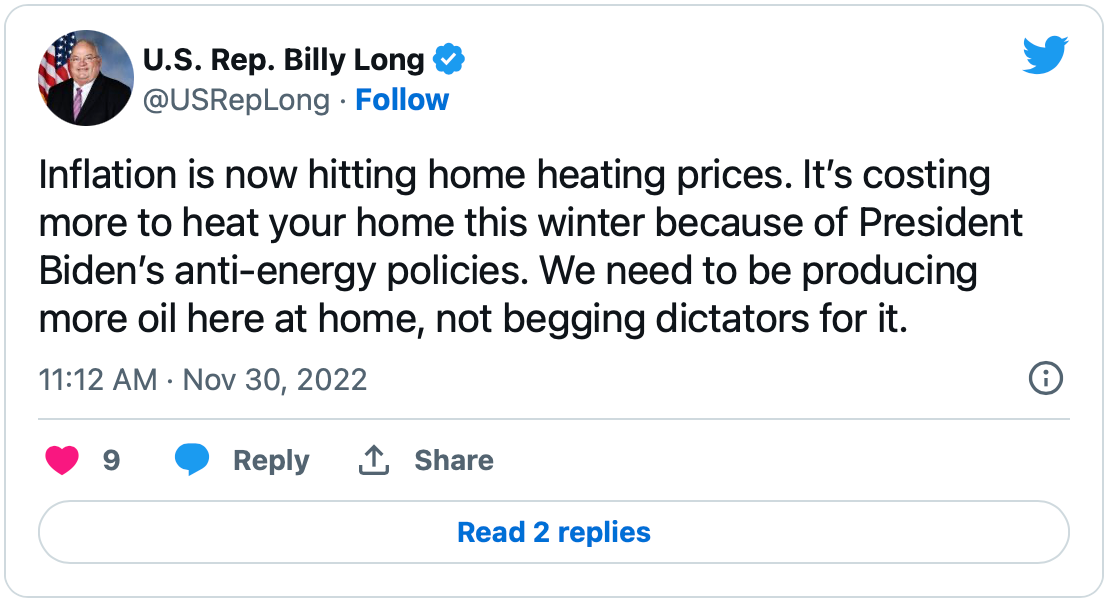 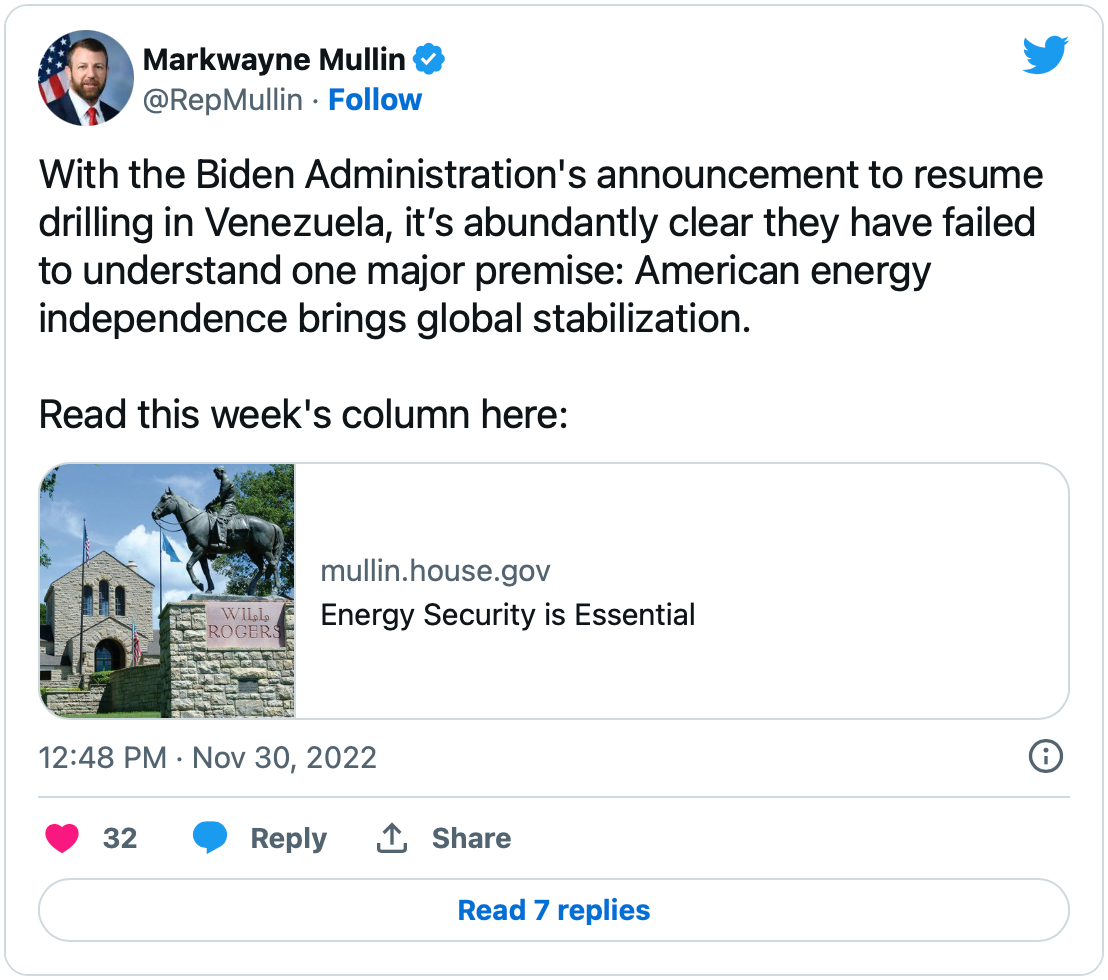 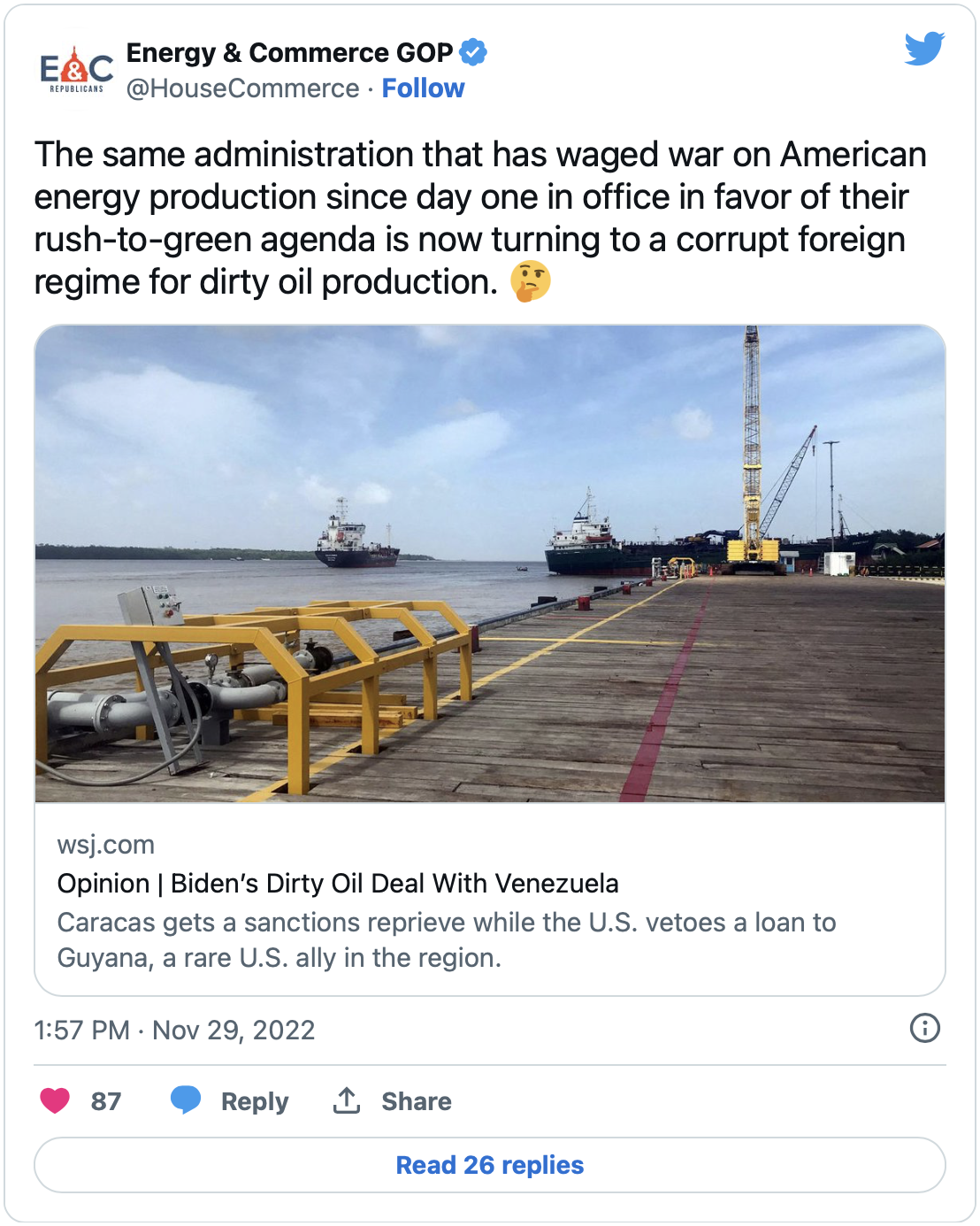